Mental wellbeing and personal effectiveness resources to help us thrive through, out and beyond of COVID 19.

Confirmation bias and its effect on effective sales qualification 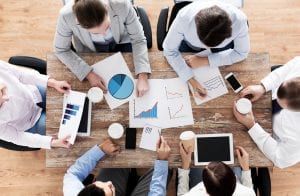 So what is confirmation bias?

Confirmation bias occurs from the direct influence of desire on beliefs. When we would like a certain idea/concept to be true, we end up believing it to be true. We are motivated by wishful thinking. This error leads to us stop gathering information when the evidence gathered so far confirms the views one would like to be true.

Once we have formed a view, we embrace information that confirms that view while ignoring, or rejecting, information that casts doubt on it. Confirmation bias suggests that we don’t perceive circumstances objectively. We pick out those bits of data that make us feel good because they confirm our ‘world view’. Thus, we may become prisoners of our assumptions.

Wishful thinking is a form of self-deception, such as false optimism. As Voltaire commented long ago, “Illusion is the first of all pleasure.  In sum, people are prone to believe what they want to believe. Seeking to confirm our beliefs comes naturally, while it feels strong and counterintuitive to look for evidence that contradicts our beliefs. The take-home lesson here is set your hypothesis and look for instances to prove that you are wrong. This is perhaps a true definition of self-confidence: the ability to look at the world without the need to look for instances that pleases our ego.

What does it mean to me in sales?

It should be obvious that confirmation bias is a real inhibitor to the effective qualification of sales prospects.  Especially if we have a very ‘skinny’ sales pipeline which will look even skinner if we correctly qualify out the prospect in question. Or it is worth a lot of revenue and corresponding commission.  There are a number of well meaning qualification tools available.

Garbage in garbage out

The first step is enhance our own self-awareness and recognise confirmation bias exists in all of us.   To effectively qualify we need to get out of our own way.  Look to bring a scientific approach to our qualification basing all answers on evidence, how do we evidence the answer we have given.

Get a colleague or boss to play devils advocate and challenge our view.

The upside to this is it gives us the best possible chance to accurately and objectively provide sales forecasts.  This being of the main reasons for strife and conflict between sales management and their teams

It might also well highlight the fact that we need to spend more time effectively prospecting to have a full well qualified sales pipeline.

“Confirmation bias is the most effective way to go on living a lie.” ― Criss Jami, Healology